The Boston Research Center (BRC) is dedicated to highlighting the neighborhood and community histories in Boston. One particular neighborhood, East Boston, has been a hub for relocation and settlement for centuries; hundreds of thousands of settlers have made East Boston their home in hopes of creating better lives for themselves. It is important to note that what is now East Boston was–in and before the 17th century–a group of five islands that were part of the ancestral lands of the Massachusett people; an Indigenous tribe that called a large portion of today’s Eastern Massachusetts their home (Pulsipher, 13).

The first European settler to East Boston was Samuel Maverick in 1633, and from that point on new enterprise slowly began to develop as the swamps were filled in and the area became known for its shipyards and shipbuilders. The maritime industry attracted a great deal of foreign-born workers and soon East Boston became a heavily populated and integral part of the city (Johnson, 6-8).

In the early twentieth century there began a wave of facilities often found in major cities with large immigrant populations known as ‘settlement houses’. These were often used to help people within lower and immigrant classes with issues involving their “health, education, employment…housing…leisure-time activities [that] were necessary for the overall well-being of their participants” (Johnson, 25). The timeline below focuses on and around one such settlement house, known as the East Boston Social Centers (EBSOC).

In looking through the timeline below, you will explore the rich and vast history of the EBSOC and how it has helped shape and create the East Boston that stands today. None of this could have been done without the phenomenal work conducted by author Kyle Ingrid Johnson in her “When All Give, All Gain: History of the East Boston Social Centers: The Intertwining of a Neighborhood with an Organization for the Community 1918 ~ 2018.” Johnson’s writing includes a detailed history of East Boston and the Social Centers, images from the EBSOC archives, a timeline, and a table of various locations important to the East Boston Social Centers. All of the work that is featured in this timeline is taken directly from the document written by Johnson. If you are interested in looking through the document yourself, you can click on the link here.

One important fact about the East Boston Social Centers that can be quite confusing is that at one point in time the EBSOC was made up of three different organizations. Before the EBSOC was ever established, two predecessor organizations called the Good Will House and the Trinity House both helped Boston communities. Over time both organizations were absorbed into the EBSOC. Eventually Trinity House was removed from the EBSOC, but it was in fact part of EBSOC for quite some time. The EBSOC that stands today is a combination of the original EBSOC and the Good Will House.

For those who may be interested in creating an historical timeline of their own organization, we at the BRC wanted to give you a bit of insight into the process that we went through in order to create this timeline.

Over the course of several weeks, Shannon Webber, a Research Associate here at the BRC, read carefully through Kyle Ingrid Johnson’s “When All Give, All Gain: History of the East Boston Social Centers: The Intertwining of a Neighborhood with an Organization for the Community 1918 ~ 2018.” and conducted further  research into the history of East Boston. She then created a spreadsheet with Google Sheets where she placed timeline information from the book plus her own research. This first spreadsheet serves as an initial data layer, capturing relevant points of interest in tables and rows, that can then be more easily used in other data projects. She then pulled out images from the “When All Give, All Gain…” document that corresponded with different points on the timeline, and added links to those images in the spreadsheet. Finally, once the timeline spreadsheet was complete, she transferred the information from her completed spreadsheet to a new free template spreadsheet created specifically for a digital timeline platform called Knight Lab. We chose Knight Lab as the timeline platform because it is a free and easy to use platform. At the BRC, we want to promote platforms that any community organization with access to a computer can use. Knight Lab is a fun and easy to use platform that does not take long to understand. The timeline above is a combination of the text timeline created by Johnson at the end of “When All Give, All Gain…” and additions from research by Webber herself.

That being said, we did run into a few problems. For example, Knight Lab timelines only accept images that have their own URL. This created an issue as all of the images featured in the timeline came directly from Kyle Ingrid Johnson’s “When All Give, All Gain…” and as such did not have a URL. In order to combat this, we uploaded all of the images featured in the timeline from Johnson’s document to Northeastern’s Digital Repository Service (DRS) which gave them a URL to link back to. This process — pulling out images from a single PDF — is an issue to keep in mind if you want to eventually make a Knight Lab timeline yourself.

In exploring other visualization options, Shannon also made a Google MyMaps that showcases the places featured in Johnson’s table of locations entitled “A Geographic Tracing of East Boston Social Centers and Predecessor Organizations’ Locations” that can be found at the back of “When All Give, All Gain…” These maps show the geographic reach of the social centers, and include summer camps, preschools, neighborhood centers, and other locations that are relevant to the EBSOC and its amazing reach throughout the city of Boston and New England as a whole. Here are screenshots of the map: 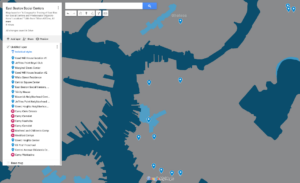 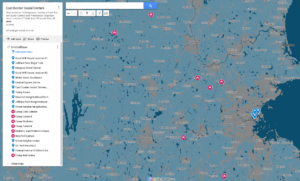 We hope that this work on the East Boston Social Centers inspires you to learn more about your organization and create your own timeline!

Johnson, Kyle Ingrid. “When All Give, All Gain: History of the East Boston Social Centers: The Intertwining of a Neighborhood with an Organization for the Community 1918 ~ 2018.” 2018.

This project was created using the CERES: Exhibit Toolkit with help from the Digital Scholarship Group at the Northeastern University Library.

Funded in part by generous support from the Andrew W. Mellon Foundation and the National Endowment for the Humanities.